Elias is mentioned in the book “From ABBA to Monica Z” by music journalist Anders Lundquist among others. The chapter... View Article

This spring marks the re-release of Elias´s debut album as Shy – 4 CLUBS AND HEARTS. It took 4 years... View Article 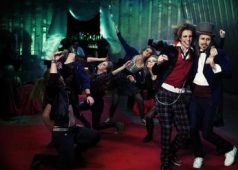 January 2, 2016 2:36 am Published by Elias Ringquist Leave your thoughts

that has been composed, written and/or produced by Elias and songs he has played or featured on – click on... View Article